Born September 12th -- we're calling him "Joseph" (Tim says we can call him "Joe" too). He's a very good-natured little boy and has already started figuring out that nights are for sleeping. The first thing Tim did this morning was check on Joseph, really cute. He says that he "used to not like him, but now [he] does." Carolina is another story. She's coping okay, but she's doing her best to ignore her baby brother and impose herself physically on me everytime I'm holding him. I need to post a picture of her with her brother. When we got home from the hospital, I could have sworn that she grew twice her size while we were gone just the one night. If she hadn't gone in for a check-up a couple weeks ago, I would have sworn that she was much bigger than average (she actually weighs under the 50th percentile, but she's definitely still solid!)
Here is Joseph within a few minutes of birth. Absolutely amazing!! 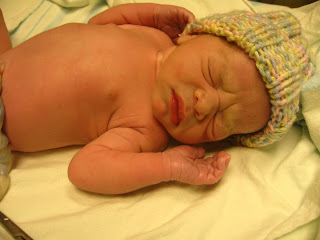 Here we are a few hours later. 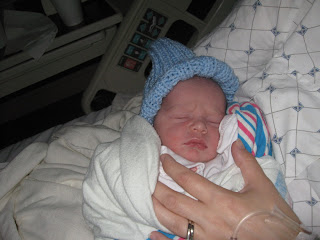 These last two were taken today -- he's four days old. He weighed 7 pounds 1 oz at birth and lost a few ounces while we were at the hospital. He's so tiny. I always laughed when I saw "newborn" clothes at the store -- my kids would never need them. Tim was 8lb6 and Carolina 8lb14. Now, I put their little sleepers on him and they don't come even close to fitting. He was born two weeks earlier than they were, but he still would have probably been my smallest. Eventually, he'll catch up!

(I made this quilt and am finally adding a post to my other blog soon). 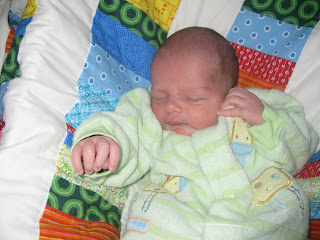 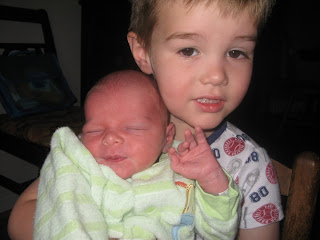 Posted by Laura Hennessee at 9:33 AM 5 comments: