While Timmy plays with his new dump truck in the backyard, Carolina plays inside with the grocery cart and kitchen. She'd really like to be outside with him, but it's way too cold these days for a not-really-walking girl. 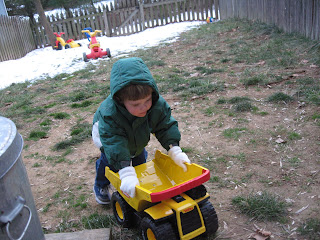 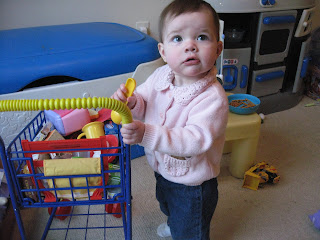 Carolina is so sweet. 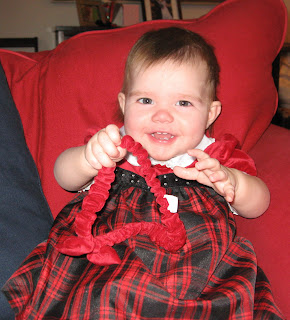 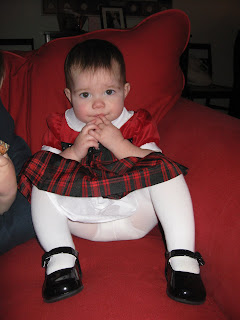 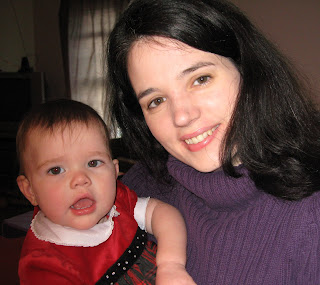 Posted by Laura Hennessee at 8:54 PM No comments:

We got this sweet towel for Carolina's birthday from our friends the Spiveys. I think in the second picture here she is saying, "mama, i'm cold, please get me dressed." Carolina is a super-sweet girl and she is finally taking her first steps. It's about time! She's 13 months old and is extremely mobile, otherwise. Just a little stubborn about walking. 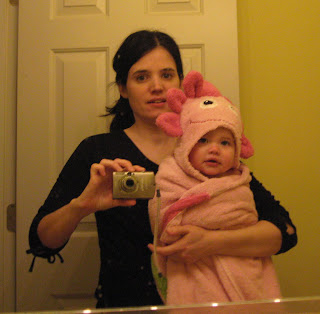 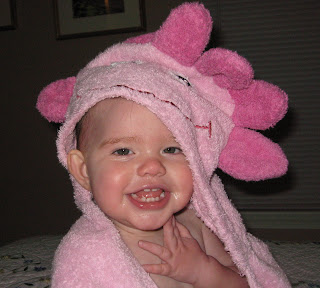 Posted by Laura Hennessee at 8:30 AM 2 comments:

I wanted to go somewhere for the kids this week. And this is where we ended up. Playwisekids. The kids had a great time, but I don't think we'll be heading back anytime soon. It was in desperate need of a facelift, especially for the price. 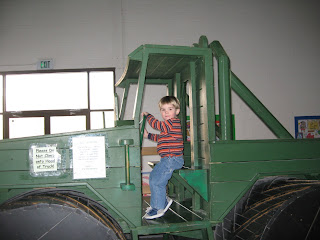 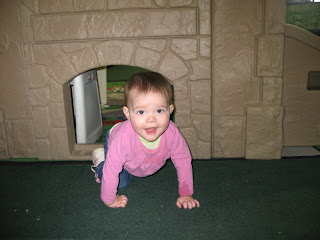 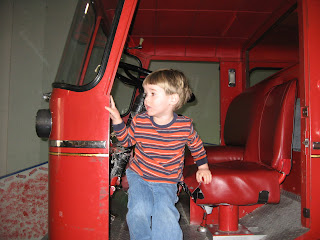 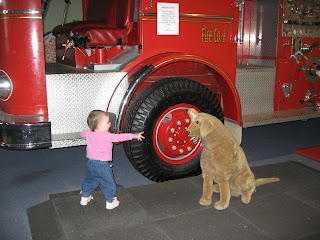 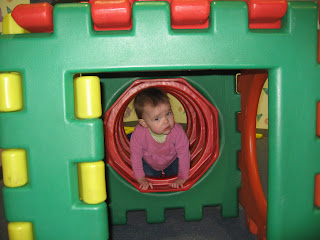 Posted by Laura Hennessee at 8:15 AM No comments:

We have really been enjoying the nice weather the last few days. Especially when we know it won't last long. The kids played on their trikes in the backyard yesterday. This was Carolina's first time on it. She just climbed right on and started going. She's really way too little for it, so it was extra cute. I got one of these at a yardsale for $1 and another from a freecycler. Carolina is really a little daredevil. I cinch her highchair/shopping cart belts as tight as I can and she still figures out how to wiggle out and stand up ready to climb out. She also climbs the stairs on the playground and heads for a slide and starts down on her own. One time I wasn't watching close enough the other day and she made it to the bottom of the slide before I realized it. She goes down feet-first on her tummy, just like the stairs. She doesn't let much stop her. We had to cut our backyard playing short when she started eating mud and I couldn't convince her to stop. 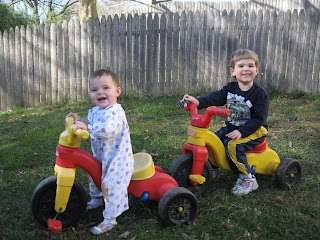 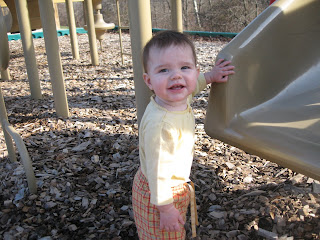 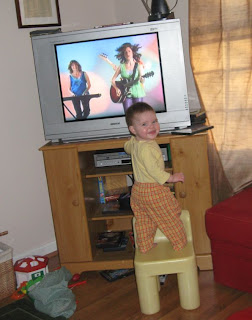 While Daddy and Carolina headed off to church this morning, I took Timmy to the emergency room. I think he learned an important lesson -- do not put anything up your nose! He had stuck a small red plastic bead that was used to make some Christmas ornaments with the young women at church. At first, the nurse in triage had me try a trick she knew for expelling objects stuck in the nose. I wish I knew about this before. Please try this with your children before taking them to the hospital! Basically, you close the non-blocked nostril and blow in the child's mouth. And it works. I did it once and the bead came down in his nostril so that I could see it. Until this point, I wasn't even sure what was in his nose. I thought he was saying "needle," but he was saying "bead-le." ER people would not let me try the trick again -- they thought he might inhale it. I felt like we were so close. I think that maybe I should have tried it again when they weren't watching.

He was the model patient until the doctor tried to actually get near his nose. They ended up first restraining him by wrapping him in a sheet. He did not like that all. Then they tied him down to a papoose board. Even worse. It doesn't really restrain his head very much, so the doctor had no success and he even inhaled it further up in his nose. They had to call an ENT doctor and we waited another 2 hours. That's a long time for a little guy to wait, especially when they wouldn't let him eat anything in case he had to be sedated.

Thankfully, he did not need to be sedated. The ENT doctor was successful at first try. When the nurses came in to help, they suggested we try the papoose board again. Aaah! I suggested we try letting him sit on my lap as the doctor first told me we would do. My mama-instinct knew that would be easier on him. My legs were wrapped around his, my arm holding his arms and my other arm holding his head against my chest. I was holding him very tight and the doctor had it out in a few seconds.

Here are some pictures of him coloring very impatiently. The next two pictures are taken by him as I tried to vainly entertain him. 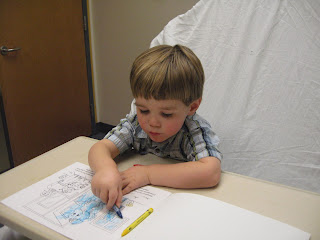 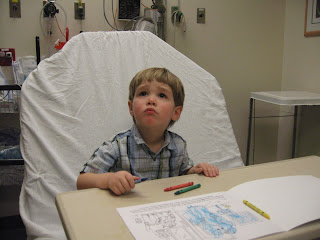 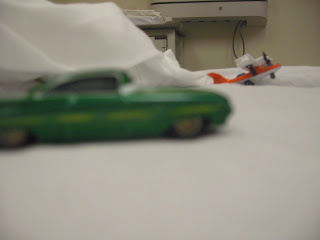 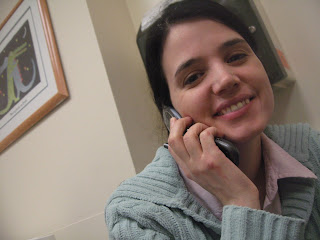 Timothy was badly in need of a haircut. I like it kind of long, but I draw the line at past his eyebrows. He was somewhat cooperative while I cut, but not quite enough, as seen in the pictures. He's still going strong as a photographer and takes a ton of pictures every day. I've included another portrait of Wuh-Wuh. 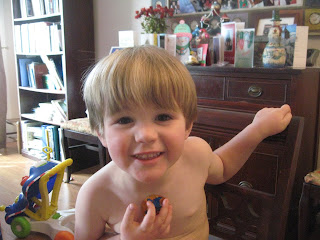 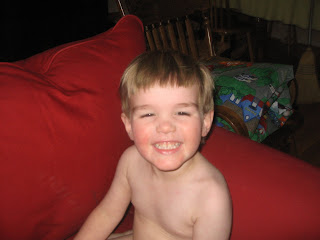 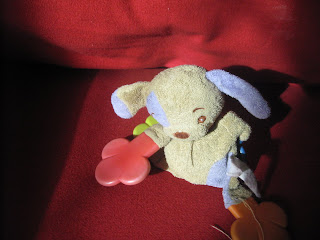 Posted by Laura Hennessee at 8:44 PM No comments:

Tim was extra quiet downstairs while I was putting Carolina down to bed and I knew he was up to something. As I came down the stairs, he said "Mama, me borrow your camera?" I totally couldn't be mad at him. He had propped "Wuh-Wuh" up on his favorite blanket ("B") and was taking pictures with the camera. He had watched me take pictures for my other blog earlier in the day. It was really sweet. Then he wanted to go upstairs and take pictures of his room. It is so interesting seeing things from a not yet 3 year old's perspective.

In other news, we are making headway in potty training. Very good news for our little independent son! 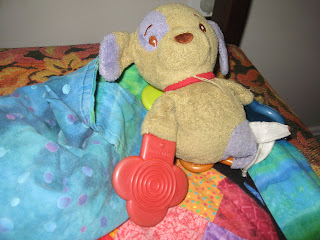 Some books on his bookcase 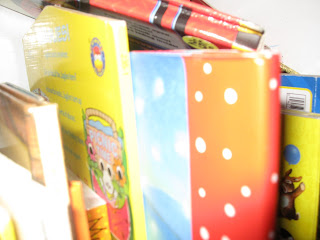 The Christmas tree on his dresser that MeeMee got for him 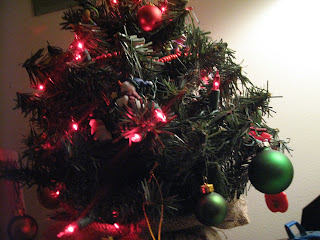 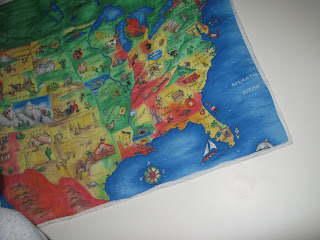 Posted by Laura Hennessee at 9:00 AM No comments:

We had a wonderful Christmas! Ben was on call all week, but never once called in. Awesome!! Everything went as planned. We spent Christmas morning at our house, then visited one set of grandparents and then the other. The best Christmas yet!

This is Tim's blue motorcycle--MeeMee gave him a backhoe and his Uncle Gene gave him a red tractor. 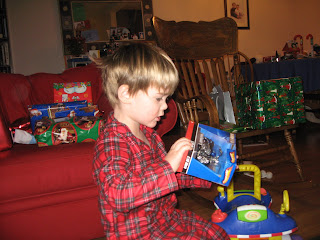 Carolina's favorite presents were clothes. She would just hug them--very cute. The girl has a dozen teeth in her mouth! 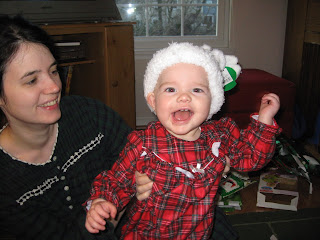 As soon as Tim opens his umbrella, he starts singing "Rain, Rain, Go Away." 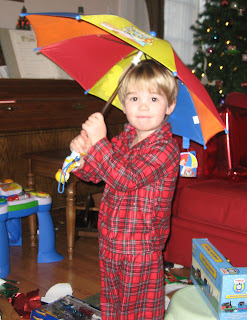 We got this kitchen for the kids on freecycle. It's great that the kids are young enough to not know that some presents come used. 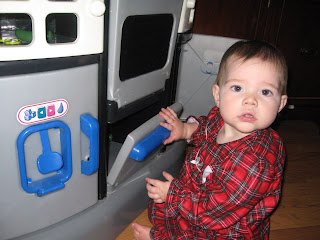 Here are Tim & Carolina not-posing in their matching pjs. They would not cooperate at all, but what can you expect at 7:45 Christmas Eve night? My mom found these for them at Wal-Mart and I thought the kids looked great. It was unexpected last minute gift for them and at least I enjoyed it. :)

I was kind of nervous, but Tim did really well sleeping Christmas Eve night. All the presents were under the tree and he'd tell me how santa was coming, so I was surprised when he slept so well. It was the next couple of nights that were the real problem. He really struggled to settle down with all the new toys all over the house. Luckily, he has adjusted well and we are back to our semi-normalness.

Posted by Laura Hennessee at 1:19 PM No comments: