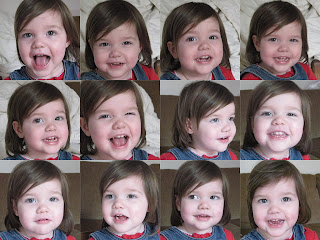 No pappy last night for the little girl. Finally. Her pacifier was only used at night or nap, but she had started to get a little obsessed. More than once I caught her in her bed sucking at random times during the day. I felt like I was dealing with an addict. So we pulled the plug. And you know what? She stepped right up and was so mature about the whole thing. I let her have the hall light on and she stayed in her room for over an hour doing puzzles in her bed, finding her own way to wind down. She didn't complain, she didn't cry, and she didn't come downstairs once. Ben and I were both super-impressed. I'm about to put her down for nap, so we'll see if this is still a positive thing.

In other news, she thinks she is a princess. We were having a discussion about our aging, little townhouse last night. One day we will probably get a bigger home. Trying to be content with out home now, I said, "I like our home." And Tim (who loves it here), agreed with me. And I said something like, "It's not like I want to live in a castle or anything..." And Carolina says, "I want to live in a castle. I'm a princess." The most hilarious things come out of this two year old's mouth. If you ask her what she wants to be when she grows up, she says, "mac & cheese."

Okay, we saw this in Virginia on the way back from NC. Almost the same spelling... 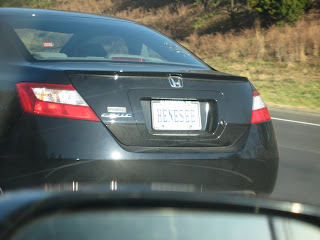 Posted by Laura Hennessee at 9:50 AM No comments:

Well, not the most complicated project, but I made up 13 bean bags for the kids to toss around. It was kind of a fun, quick project and the kids are enjoying them. 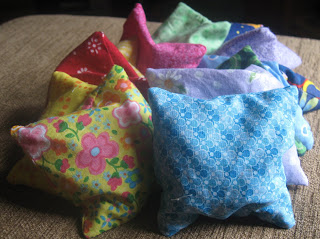 Posted by Laura Hennessee at 9:42 AM No comments:

It's hard to get these three monkeys to cooperate for a picture. And, yes, Tim was smelling yellow flowers (both daffodils and dandelions, not sure which rubbed off on his nose). 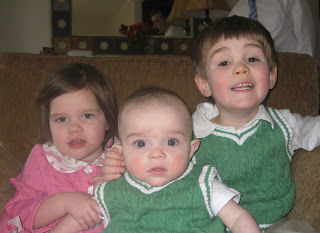 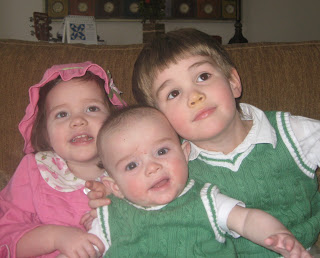 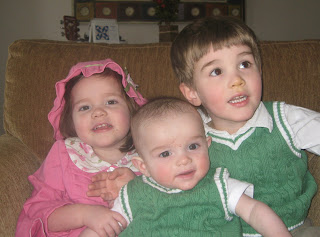 The egg decorating gets more fun each year as the kids get older. Here are the eggs we decorated: 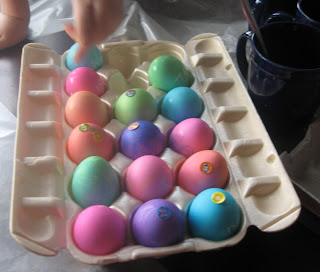 And I caught Carolina a little later adding some finishing touches to just the pink & purple ones: 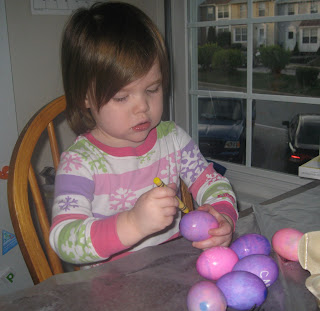 And here are the baskets. Just a little bit of candy and some homemade bunnies I made in a couple of afternoons recently. I just drew a pattern freehand and sewed them up. 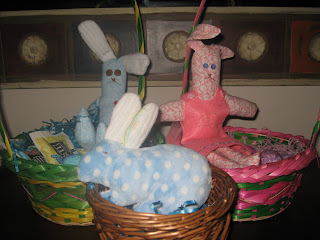 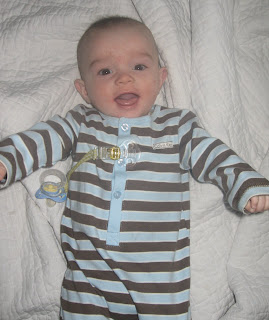 Little Joe is doing a great job sitting up now. He loves it and so do I. He just enjoys sitting and playing and being a part of everything.

Regarding his face and the no-dairy-for-mom business: I feel like no milk/cheese for me really helped Joseph initially, but it kind of came to a stand-still. It wasn't flaring up too bad, but not getting better like I wanted it to. I've applied his medication several times this week and it really helps bring the red down. I'm still going without dairy. I'm pretty sure I was consuming way too much. We were recycling 4 empty milk jugs a week and this last week it was ONE. Okay, there was a near empty one in the fridge, but still! I figure I was drinking 2+ gallons just myself. And then I have not had any ice cream. So, this is saving us money and I actually lost a few pounds in the last ten days. That's big for me. I had not lost an ounce since Joseph was 2 weeks old (for 6 months, in other words).

My mom says he looks like Yoda. What do you think? I'm okay with that since we're Star Wars fans, I guess. 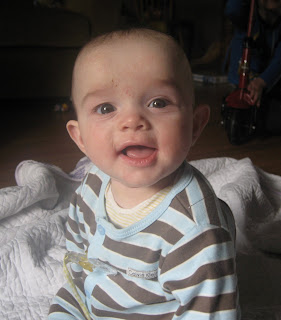 Since he's sitting so well, he's joined his siblings in the group bathtub. All three love it! 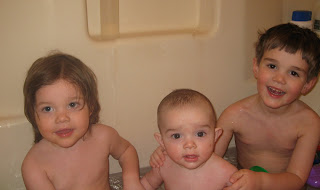 He started sticking out his tongue a couple of days ago. The first day it stayed out almost all of the time. I googled it and couldn't find any reason to worry. He's really a funny guy. 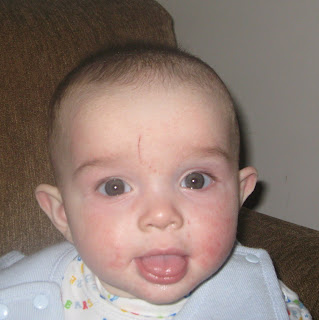 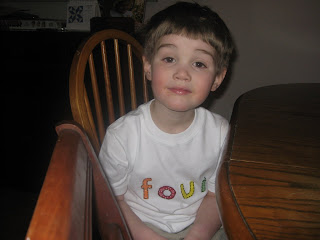 Tim requested another birthday shirt this year. It's sort of becoming a semi-tradition. He has a three shirt and they both have one bibs (no picture of his, sorry). I thought this came out really cute and I was worried it was a little too cute and maybe girly. I was glad when Ben said, "he's four." Meaning, he's just a little guy, no worries. He loves it! 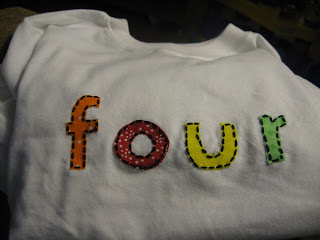 Posted by Laura Hennessee at 8:36 AM No comments: 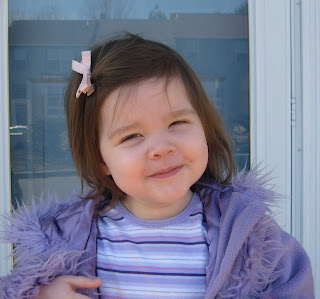 Carolina, my little two-year old, has resisted her morning diaper change the last few days. This morning she tried to convince me that her current wet, soggy diaper was her favorite diaper and she wanted to keep it on. She pointed to a random zebra and how she really liked it. Ummm...I don't think so, little lady. Nice try. I'm guessing this is some sort of sign of potty-training readiness. Hopefully soon.

Posted by Laura Hennessee at 10:16 PM No comments:

Timmy has caught the bug! The obsession with anything Star Wars bug. He got $50 for his birthday (part Mee-Mee and part great-grandma) and we finally let him spend some. This is the first time he's ever spent any money (usually it goes straight to the piggy bank and then to the bank account). Since the kids have all been house-bound, Timmy and I took time online to pick out just the right thing. It had to be Star Wars Lego and it had to have R2-D2. We all went out this morning for the first time since Saturday and Ben helped him build it when we got home. Tim actually did a bunch of it by himself, but there is good reason to list it age 7-12. He started looking for ways to alter it immediately after it was built.

In other news: Anybody out there have a label maker? Not sure why, but I've been wanting one for months. Staples has a Brother PT-1880 on sale for $20 through 4/4 (normally $50). I picked one up this morning with a gift card that my mom gave me for my birthday in 2008. Now what should I label? On the way to Staples, Ben asks, "so why exactly do you need a labeler?" My answer: "it will solve all of my organizational problems." :) 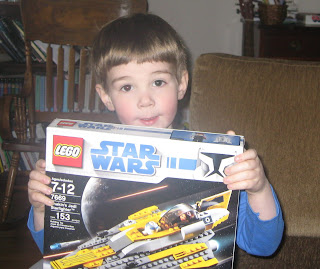 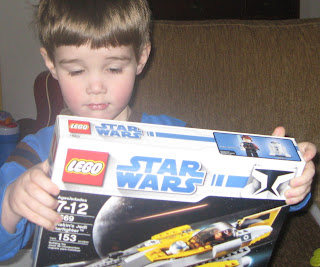 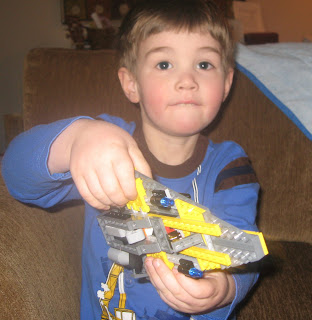 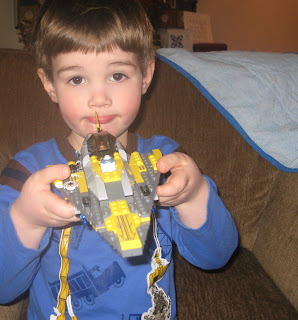 Rather than have a big party, we just kept it small with just the five of us this year. Everyone enjoyed themselves. No stress and lots of fun (despite the kids being sick). I knew they were coming down with something, but I thought they were feeling okay early Friday. It seems like Timmy gets sick every year around his birthday. Outside of colds, this is our first virus all winter/spring.

So our Friday went like this: I made chocolate chip pancakes for breakfast and then Ben went to work for half a day. I took the kids to their doctor appointments and we ordered pizza for lunch. After lunch, Tim blew out his candles and he opened his presents. I should have realized then that the kids were not better because no one wanted any cake and we didn't cut into to it until the next day. Timmy got 2 light sabers, one for him and another for a friend (his sister mostly) and he got the wii Diego game. 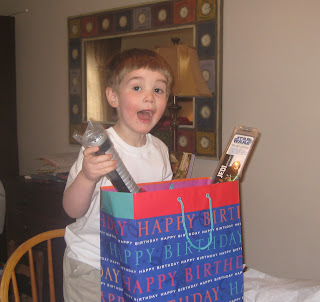 After Carolina and Joseph naps, we went down to the Baltimore Aquarium for the first time as a family. We opted to take the metro down there for fun and to save money on parking. I think next time we'll pay to park (around $20, I think). It's kind of a long walk for the little ones and we ended up walking through the red-light district, "the block," at the end of the day. Seriously scary and talk about feeling out of place. We held tight to each other and tried not to look at anything or anybody.

Now, back to the aquarium. I'm glad we went. It was the last night of the season for "Fridays after Five." I think it cost about $35 for all of us and would normally cost $74. The place was really packed and we moved through things very quickly. I'm glad we bought the dolphin show package because it gave us a chance to sit down and relax. 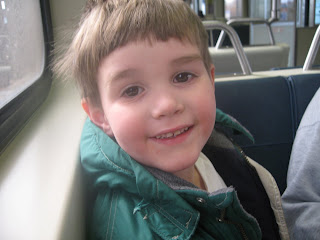 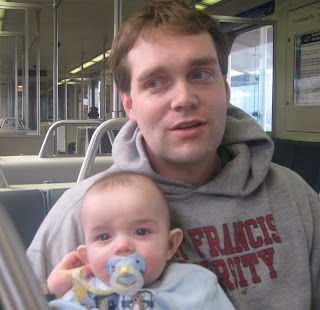 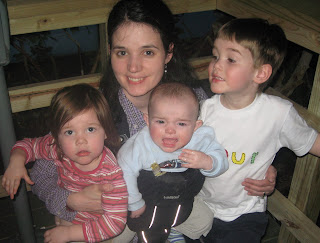