Little Lina was quiet upstairs for awhile and I was able to grab a few minutes doing some dishes. I figured she was probably tearing apart her room or destroying something, but I told myself that I was willing to let that happen for a few minutes to myself trying to get something done. Then she comes down all decked out in her princess dress-up clothes. Heels and all. Of course she wants to help, so I put her to work. She's really a great little helper! Her favorite thing to say is, "I DO IT!"

Tim was not a difficult two-year old (no more than the previous two years), so I really thought that perhaps the terrible twos did not exist. I was wrong. This little one is definitely a handful. She can be super sweet, but she also knows how to pretty stubborn, loud, defiant, loud, rotten, and loud. I'm trying to train my mind to appreciate the good moments and not stress about the aggravating ones. 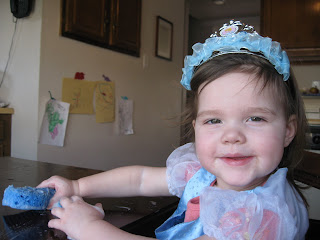 Posted by Laura Hennessee at 9:20 AM No comments: 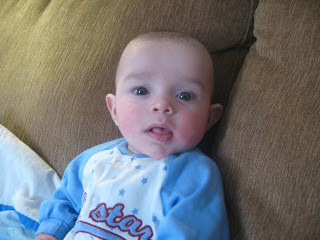 Two days ago Joseph rolled over (finally!).  He'll be five months old in another week, so I felt like it was about time.  I love this stage.  His little personality is shining through with tons of smiles and laughter, but he can't actually go anywhere.  We haven't had to worry about baby-proofing yet.  It's going to be harder this time than the first two kids because now we have LEGOS (and kid k'nex, lincoln logs, and all sorts of little goodies).  No worries yet though.  I also love putting off solid foods until 6 months.  With Tim, I started a lot earlier (it was all new and fun then), but now I'm enjoying just nursing for awhile longer.  At his four-month appointment, the pediatrician (he is kind of old-school) recommended starting soon, but it's seriously easier for me not too.  I'll be feeding him every day for a long, long time and there just isn't a hurry.
Check out this video (this is my first attempt at posting a video). It was taken the day before he officially was rolling:
Posted by Laura Hennessee at 7:52 AM 4 comments:

I was hoping to wait a little longer for this, but we made the move on Sunday. Someone in the ward was giving away a toddler bed and the day after I asked if I could have it, Carolina started to hang out on the top of her crib railing after naps. Now we just need to get her potty-trained. 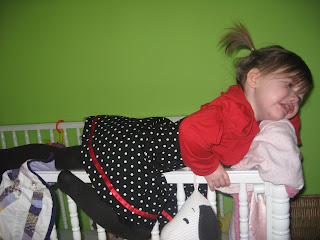 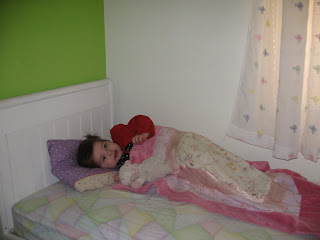