Timmy had his annual check-up on Friday too. Our pediatrician told me that my kids are really good and he said he meant it because he sees lots of kids. That makes me feel better because in my eyes they really are a wild bunch. Our pediatrician always gives them "A++" on my take home report. Tim is growing and doing pretty good. Our only concern from the appointment is that he did not pass his vision screening. 20/50. It's certainly possible that his eyes aren't that bad and he was just having trouble cooperating. We've already decided that all of our children will be near-sighted. Ben's vision is pretty terrible and my parents and all seven of us kids are near-sighted. I didn't expect my four-year to wear glasses though. Not a big deal -- life could be worse.

I'll never forget a women in a previous ward who related how people would tell her how sorry they were that her five-year old had to wear glasses. And the mom was like -- "Hello??? I'm just glad they have the ability to diagnose and treat her at this age." 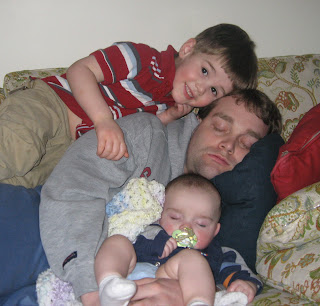 Posted by Laura Hennessee at 7:45 AM 2 comments:

I think of Joseph affectionately as my little runt. Like in a Charlotte's Web sort of way. At some point, I'll stop telling Ben, "Well, he was born two weeks earlier." Ben just shakes his head. According to my calculations he was. The first two kids were born 8 days after their due dates and Joseph was induced a week before his due date. Got it? For the record, I know that a full-term baby can be born anywhere from 38-42 weeks.

Anyway, he had a great doctor appointment on Friday for his six month check-up. He is 27 1/2 inches long and weighs 15 pounds 15 ounces. That puts him at 75th and 15th percentiles according to the growth charts. He's really pretty healthy. My only concern has been his skin. Specifically, his face. It is super-dry a lot, some days worse than other days. And it's only on his face. The doctor won't diagnose it as eczema, but he did give me a steroid to use sparingly. I may not use it at all. I read that dairy in a mom's diet can irritate some babies' faces, so a few days ago, I cut way back on dairy in my own diet and I think it has already made a huge improvement. I haven't had a glass of milk in 4 days! I probably drink 3 glasses a day. We're also big cheese eaters and I probably have ten pounds of cheese in the fridge. I think I'll have to cook up some cheesy dishes and just refrain from eating. I don't want it to all go to waste! 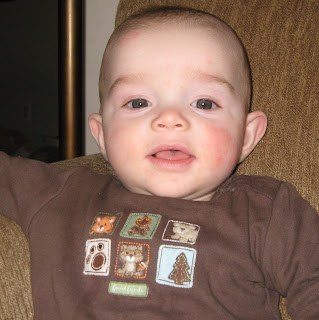 Posted by Laura Hennessee at 7:30 AM 3 comments: 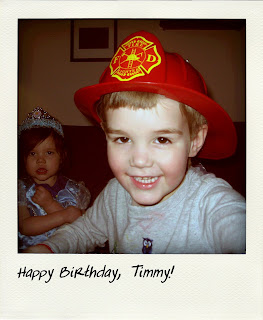 I seriously can not believe that I have a four-year old. I mean, I've been thinking of him as just-about-four for a little while, so it's not such a shocker. But he's such a big boy now. He's really matured over the last year. He can be such a big help and he can do such a nice job of listening to me (still working on that though).
Here are some favorite quotes from him:
"It's tough being a Timmy"
"I'm not playing, I'm building" (when asked to stop playing with his legos)
"She looks like a rock star" (when asked to help his sister understand why it was important for her to keep her hair clipped back)
One of my favorite things about Tim are his sweet, independent little prayers. There was a time where it was a huge struggle to get him to pray.  Now, he'll say his bedtime prayer without even being prompted.  His prayers often include thanks for: mama, daddy, timmy, carolina, joseph, mee-mee, pop-pop, aunt peggy, uncle ronald, seasons, roses to bloom, flowers to grow, christmas, and easter.
His favorites (according to him)
color: green
number: 3
toy: tractor
food: tomato soup
dessert: sherbet
movie: Cars
game: I spy...
boardgame: checkers
video game: wii star wars
song: alphabet song

Anyone else listen to audiobooks?  I'm looking for recommendations. I read all sorts of stuff, but especially like fiction (historical and lately post-apocalyptic stuff).  Books on CD make unpleasant tasks like mopping the floor go by tons faster.  I just finished listening to the entire "Uglies" series by Scott Westerfeld.  That was great.  I've found some books to be not so stellar.  The thing is, it's got to be a clean book.  I'm kind of a stickler for that and the 2 and 3 year old will sometimes be listening. If you're not into audiobooks, you totally should try it.  As soon as the weather warms a little, I plan on running to a book.
Posted by Laura Hennessee at 7:30 AM 2 comments:

So, the kids and I rarely go out without Ben. Maybe once a week. Sometimes it's the library or a friend's house or an occasional trip to Wal-Mart, but that's all that I can handle. This last Saturday, I decided to take just Carolina out for her first haircut and a trip to the library. Wow! It was so easy. She wasn't perfect, but it was no problem getting her back on track. Oh, by the way, she was great for her haircut. It was just a few inches off the back.

Later, during her nap, I took Tim out just for fun. We went to a couple of craft collectible stores in town. Not terribly exciting, but I was looking for a grandma present. Timmy was soooo good!! I asked him not to touch anything without asking and he actually listened to me. I realized that those two kids feed off each other and take advantage of their frazzled mom sometimes. I am definitely going to take them out separately again soon -- it was actually fun! 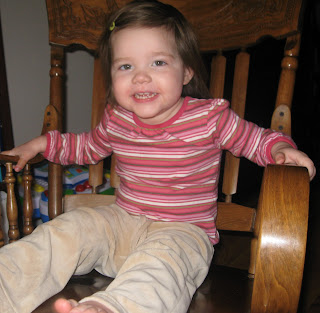 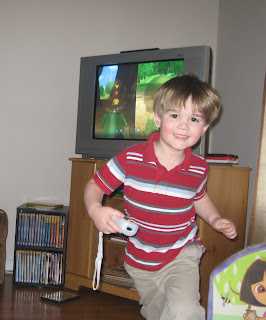 (here Tim is running with the Wii Fit. I am so ready for spring and some outdoor running! Oh, and FYI, the Wii Fit game tries to say this boy is overweight...hmmm...)

(Original posting has the wrong video -- here it is corrected!)
So, Carolina did this back in January. It's kind of her own version of the ABCs, but it is seriously so sweet. I love to watch it (so does she!) My little girl can be seriously aggravating sometimes with her attitude, but I like to remember times like these!
(just ignore Ben asking about why we have cocoa puffs in the bathroom -- wonder which two year old was to blame?)

I saw the idea of framing pages from children's picture books last summer and really, really thought it looked cute. So, I've been on the lookout for a good picture book. I found this book for a quarter at the library. I think I should have put them in bigger frames with mattes, but I'm fairly satisfied with the outcome. 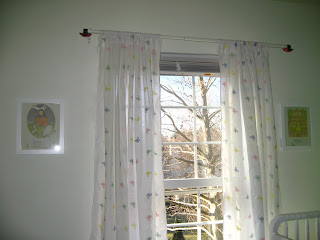 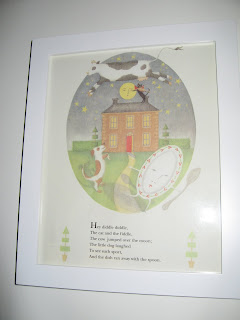 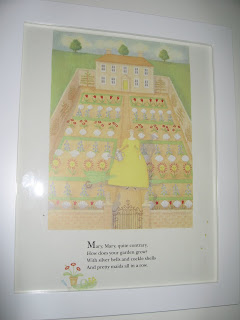 So for the last ward Young Women in Excellence activity, I had responsibility for the "integrity" table. I wanted to complete a personal progress project and have something to display, so I created this in just a day or two. The felt flowers came store-bought via my grandma. The pink fabric was once a vintage napkin. The whole project was pretty easy.

As a side note, I was the YW secretary at the time and in January I found myself with a new calling. I'm now the enrichment counselor in the ward relief society. When the bishop called me, he told me that I was "uniquely qualified." I didn't call him on it, but seriously, how am i uniquely qualified? Then it came to me -- I LOVE ENRICHMENT. I think that's all it takes. So, I'm a little less nervous about the calling. But, if any of you wonderful sisters out there have ideas for activities, pointers, things that work or don't work in your ward, etc., please, please, please let me know! 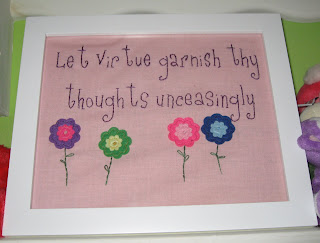 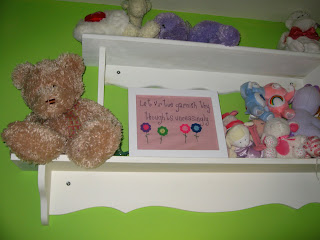 I decided to do a few semi-crafty things for Carolina and someday Joseph's room. Here's a little mobile I created while sitting on the sofa. I cut all the hearts out freehand (you can tell!) and sewed them by hand. I like these sorts of projects to do when I'm not interested in the game on TV, but I still want to spend time with Ben. This was a great project to use up some of my felt scraps. I also used an embroidery hoop (10 cents at a yard sale) and some white embroidery thread.
Warning: more craftiness soon! 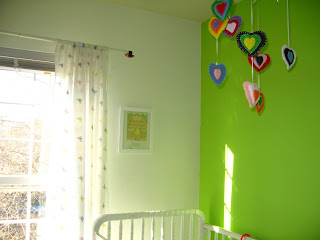 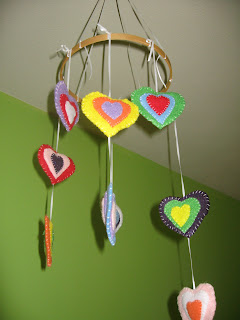 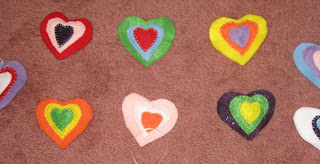