All that I can handle?

So we were leaving a restaurant the other night (just me and the older two kids while Ben was in the restaurant with Joseph paying the bill) and the kids were being their usual energetic selves. Not being bad, just a little rambunctious. A lady held the door for us and said kindly, "You've got all that you can handle!" I just laughed...little did she know there was a third in the restaurant. She's probably right anyway. :)

Joseph is growing so quickly. He was born at 7 pounds 1 ounce and when he went to the doctor for his first appointment (at 2 weeks) he weighed 8 pounds. Yay! I always breathe a sigh of relief when the kids get back up to birth weight.

The kids had dentist appointments this last week and all is well. Technically, Carolina did not have an appointment because their pedodontist usually does not see patients as young as she is (21 months). He did take a peek in her mouth and told us to go ahead and schedule her an appointment the next time. He told us that she is very precocious (dentally speaking) with all 20 of her baby teeth already in. I doubt it's true, but he said he hasn't seen a full mouth that young. I'm just happy that both kids were so compliant during the exams.

These pictures were taken a week ago at my aunt's house. I really need to take more. Carolina is a little upset in the first picture because she'd rather be the one holding Joseph. She loves holding him -- she holds on tight (a little too tight) and she'll sway back and forth, "rocking" the baby. 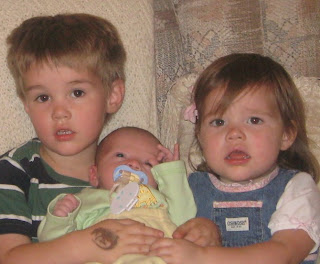 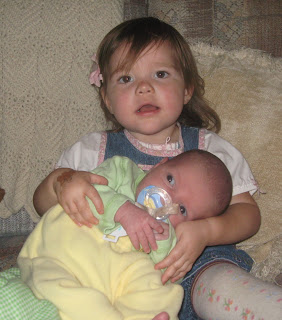 Posted by Laura Hennessee at 9:57 PM

BTW: This past week Katie has finally gone from 6 teeth to 6.5 teeth (two spikes of molar have appeared) Can we say crazy. At this rate she might be 20 when she gets her 20 baby teeth in :) Maybe Carolina can give her some advise.